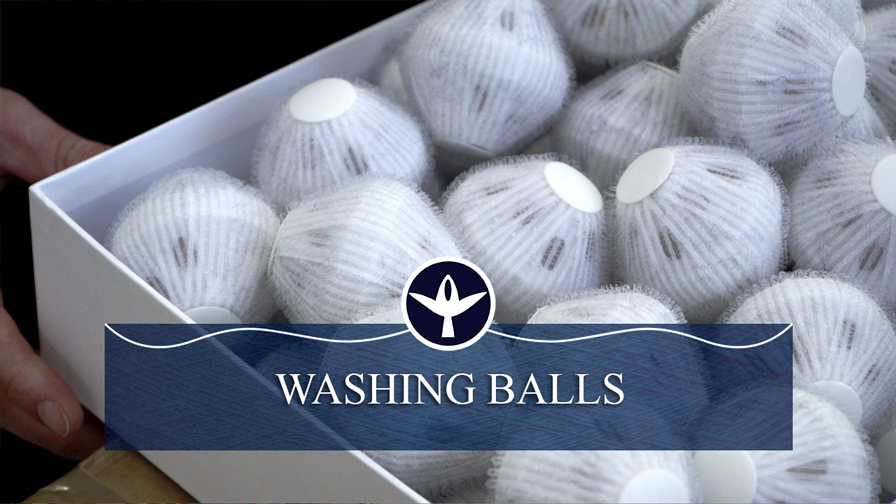 The textile industry is one of the most harmful to the environment, because, especially in the washing phase, it consumes large quantities of water and electricity and uses chemical additives with a high polluting power.

For some time now, in Feel Blue we have implemented systems to reduce the environmental impact of washing, in particular:

Since 2021 we have also been using Washing Balls, spheres with 99.9% pure silver that allow you to wash the yarns with cold water, using cycles of up to 4 minutes, without adding soaps, fulling agents or chemical acidifiers.

It sounds incredible, but the result is flawless.

Once introduced into the washing machine, the Washing Balls spin continuously in the water and induce a quick change of magnetic fields. The water, thus “bombarded” and constantly moving, breaks down the limestone molecules and gives rise to the aragonite crystals. These remain in suspension and are removed by the same flow of water, while a new bicarbonate molecule (NaHCO3) is formed which stabilizes the PH of the water and gives it greater cleaning power.

Washing Balls contain silver ions (Ag +) whose antibacterial and biocidal action has been known since ancient times, so much so that the Romans used to put pieces of silver inside liquid containers to preserve them longer. In fact, silver ions are capable of irreversibly damaging the key enzyme system in the membrane of pathogens.

The use of Washing Balls therefore allows us to also obtain a disinfectant and sanitizing action in the cold and without chemical additives.

Purifying water to be reused

Washing Balls also act as a biological filter: they purify the water already used in washing and allow us to reuse it numerous times, further reducing consumption. Purification takes place by natural decomposition of the materials released in the washing from which bacterial colonies originate. These organisms feed on all processing residues. This is a really important action because these residues are often not intercepted by traditional filters and become the main polluting sediment in our seas.